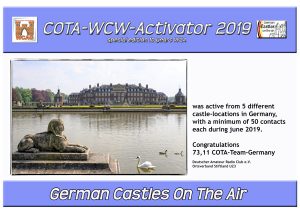 As WCA has the 10year jubilee in 2019 the world-castle-weekend was extended to the period of 01.-30.june 2019. To improve also the number of activities from german castle COTA-team-germany offers the WCW-activator-award 2019. A minimum of 5 different castle locations in germany needs to be activated with a minimum of 50 contacts each, so altogether 250 contacts (of course more would be fine). The award can be applied by sending a list of the 5 different german castle locations to the log-address. Also the logs needs to be delivered as ADI-file.
73,11, COTA-Team-Germany 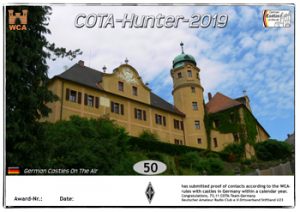 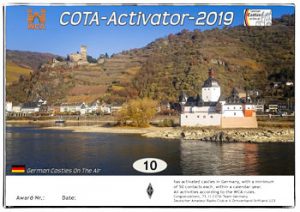 Also in 2019 we have a yearly COTA-Hunter and COTA-Activator award-class. The logsearch for this award is available on our COTA-logsearch-server. All bands modes are valid. If you want a point for the COTA-activator, minimum 50 contacts needs to be made from that german castle. 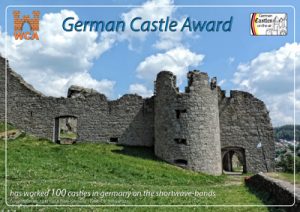 WCA-program has the 10year anniversary in 2019. To commemorate this birthday and bring further activities on the bands with portable activations from german castles, the DARC-OV-Stiftland in association with COTA-Team-Germany hand out the new award program “German Castle Award”. There will be a new logsearch-functionality at https://logsearch.cotagroup.org where you can apply for this new award. Valid are contacts with german castles starting 01.january 2019 and later. The award will be available in steps by 100 worked german WCA-numbers. There are only contacts on the shortwave-bands (10-160 meter) valid. 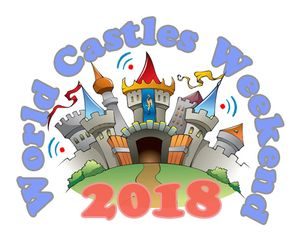 At june 16 and 17 the WCAG-Team invites for the 9th time to the World Castle Weekend all participants to produce activities from castles in the world.
COTA Team Germany honors all participants who make an activity from a german castle and generate a minimum of 50 contacts with a special edition from the german COTA-award.
Please send ADI-log with the german reference number via mail and you will get automatically the award via mail.
Good luck for all hunters and activators. More details about the event can be found on the WCA-homepage. 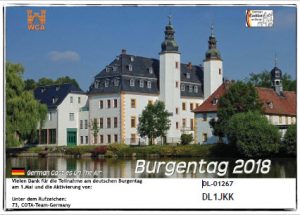 Altogether 9200 contacts in 120 logs were sent to us for the castle-day at may 01. All logs are already uploaded and the -awards for activators from the german castles were sent out. Thanks to all participants. 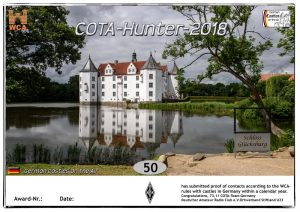 In 2017 COTA-Team-Germany invented together with DARC-OV-Stiftland the Annual COTA 2017 award program. The goal was to bring WCA-references in germany which were probably only active once, back on the bands. Up till today we could issue the COTA-annual-hunter 2017 altogether 175 times and the COTA-annual-activator 2017 about 40 times. There were altogether 300 german references which could be reactivated during past year again. Beside this another 500 were active for the first time which resulted in 1815 activation-logs in total, about 20 percent more than the year before. 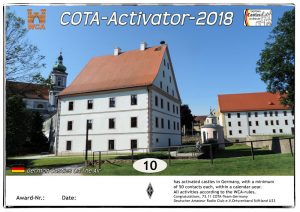 Round 140000 QSO-points could be added into the COTA-logsearch database which has meanwhile around 750000 contacts included. (We load all contacts also in the international WCA-database) Also the standard COTA-award-program is very popular. We reached the 2200 awards from the normal COTA-hunter-award. So thanks to all, who made this success possible, Hunter, Activator, Award-Manager and thanks to those who offered the nice pictures for the awards.
So 01.01. will be the new start for the COTA-Annual-Hunter 2018 and COTA-Annual-Activator 2018-award series.
We wish you a happy and successful new year and good luck with COTA-hunting.

The first quarter of 2017 was again a record with COTA-activities. Altogether 300 logs reached us until end of march. Database comes closer to 650000 entries. Especially the yearly COTA-award has more and more friends. We could issue the first awards for 30 and for 40 activated german castles in 2017 to Peter DJ2OS and the hunter-awards 100 and 150 in 2017 went to Artur SP8LEP. The 1500. standard-COTA-award in the class 375 was reached by Peter DL8NCA. Many thanks to all activators and collectors. 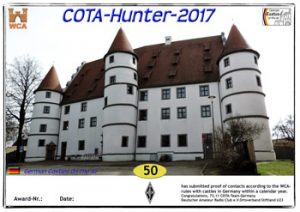 For the Annual-COTA-Activator you have to activate 10 different german castles within a calendar-year with minumum 50 contacts done from each (can be fullfilled within several activities. Further award-classes are available for 20/30/etc. The logs therefor needs to be sent in ADIF-format to Manfred DF6EX
Both awards are free of charge and will be delivered via mail in PDF-format. Many thanks for the adaptions on the database to Friedrich DL4BBH. 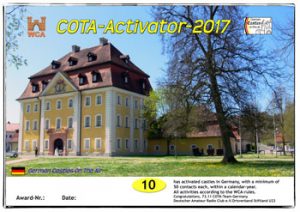 This will give in the future a higher focus on objects which were active maybe only one time. With the reactivation also the hunters who missed first activity will get a second chance and will improve also their score for the normal COTA-award program. A happy new year 2017 with good health and cu on the bands. 73, 11, Manfred DF6EX OVV U23 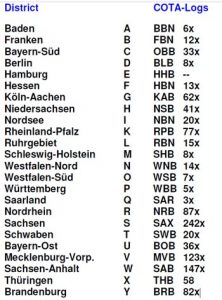 Altogether 1119 log-files were uploaded for 397 different callsigns during the year 2016. The COTA-database includes actually nearly 600000 contacts. Thanks to Karl DL1JKK, who made the uploads 2 times, one for COTA, one for WCA. Our COTA-award meanwhile was issued 1341 times, the highest issued class currently is the COTA-675.
With these nearly 600000 contacts of course we could also support the international WCA-award-program.
Thanks for the support and a happy new year 2017 from COTA-Team-Germany ! 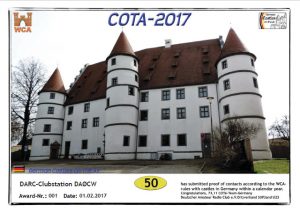 Planned for start at 01.january we intend to establish a yearly COTA-award. The standard-COTA-award became very successful with more than 1200 issued awards till today. A lot of people however have their main-focus to activate a new castle. With the annual COTA-award we try to promote re-activations of castles as at 01.january each year everybody starts with 0. It´s planned to bring up a hunter-class for 50, 100 etc. worked castles plus an activator-class for 10,20 etc. activated castles. Start will be at january, 01 2017.
Beside this of course the standard COTA-award still continues as it is.